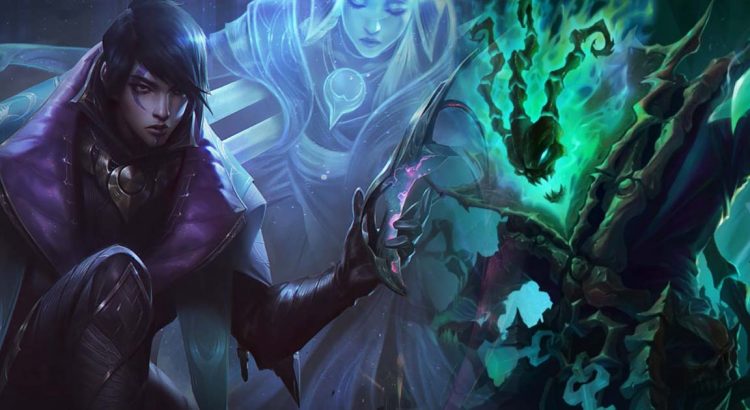 Picking the best combo for playing in the bot lane can be hard. While most ADC/Support combos can do well there are some that are exceptional. So let’s take a look at some of League of Legends best ADC Support combos. Here is a list of some of the best combinations that you can play (the list is in no particular order).

So now let’s take a look at each of the lanes and examine what makes them so powerful. Remember, this list is just an example of some great bot lane combos, there are many more that we didn’t cover here, but perhaps this list can provide some insight into what makes a strong bot lane, and this can help you when you choose who to play. For an overview of strong champions in all of the lanes check out our guide to the best beginner champions in League of Legends in 2022.

Thresh is a great match for Aphelios, making up for many of his weaknesses. Thresh can provide the mobility and early game help that Aphelios needs to scale well into the late game. For those reasons this lane is very popular in pro play. Thresh can hook and slow enemies, giving Aphelios plenty of time to hit them hard with his autos, making it easy to get kills. Thresh can also keep Aphelios safe by throwing out his W ability, keeping him safe from enemy ganks.

The poke lane from hell. Super safe in lane with infinite poke from both Ezreal and Karma will make your opponents hate you. You should be able to get a safe lead in lane by poking out your opponents and forcing them to go back to base often. Then you can keep up the oppressive poke into the late game to help you siege and win objectives. Because of how safe this lane can play it is recommended for anyone that is not a very confident laner and does not want to play too aggressive in lane.

Leona and Miss Fortune is a great wombo combo lane. You can play aggressive in lane to get kills, and once you get to teamfights you can dominate the entire enemy team (as long as your coordination is good) by first dropping Leona ult on the enemy team, and then following up with Miss Fortune ult on top, guaranteeing a ton of AoE damage. In the late game one successful wombo combo can often mean that the game is over.

Kog’Maw loves steroids, and has trouble staying alive. Lulu helps with both of these, providing extra mobility, damage and safety to allow Kog’Maw to hyper carry the game on his weird alien bug back. This lane might not win lane, but it will make up for it in the late game by scaling super hard. It does require a high degree of trust between the support and ADC though, given how vulnerable Kog’Maw can be.

A great lane if you want to go for kills on the enemy bot laners. Braum can slow with his Q and Ashe follows up with infinite slows from her autos. Then Braum’s passive procs and the enemy is dead. Once you hit level 6 you both have mega CC ultimates to keep killing the opposing bot lane over and over. Braum can also block projectiles for Ashe, to help keep her safe, which is important due to her low mobility.